A fellow on facebook is minting and selling silver coins with a QR code on them. When scanned the QR code directs you to a site that gives you the current value of silver. Sometimes I think that the internet gives us to much information. I'm not sure I like the idea of carrying a coin that has such a rapidly varying value.

This got us thinking about QR codes on currency. This is an idea that has been knocked around for the past few years. The Dutch produced a coin in 2011 with a QR code on it. That QR code pointed to the website of the Royal Dutch Mint and played a video about the mint and the coin. 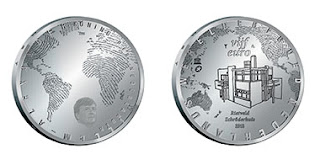 Interestingly, the present Dutch five euro coin has fingerprints on it. I guess the QR code wasn't "mark of the beastish" enough, so the Dutch are now putting biometrics on their coins. The fingerprints form a map of the world. They are the fingerprints of family members of Tine Melzer, the coin designer.  This is also the first coin to feature the image of King Willem-Alexander since his mother, Queen Beatrix, abdicated the throne.

Also in 2011, Sweden began looking into putting QR codes on their currency. The idea died, however, because of “security concerns”. The good news for Sweden though is that now there are invisible QR codes. Last year, these were being considered for currency to prevent counterfeiting.

The QR code is a square of black and white pixels that can be scanned by a smartphone, which then links to an Internet address.

It is being used more and more by museums and companies who want to provide additional information about an exhibition, product or service, but the idea here is to use it as a form of authentication.

Writing in the British journal Nanotechnology, materials engineers led by Jon Kellar at the South Dakota School of Mines and Technology says their invention comprises a QR code made of nanoparticles that have been combined with blue and green fluorescent ink.

It remains invisible until the object is illuminated by a near-infrared laser.

The nanoparticles absorb photons at a non-visible wavelength but emit them in a visible wavelength, a trick called upconversion that causes the QR code to pop up almost like magic and allow itself to be scanned.
http://www.engadget.com/2012/09/13/new-nano-code-could-help-fight-banknote-forgery-by-embedding-i/