Facebook recently announced that they are in the process of developing their own blockchain cryptocurrency that they are calling Libra.  Time will tell if Facebook will be successful with the new coin, but Mike Orcutt at MIT Technology Review saw within FB's Libra whitepaper something that may be truly groundbreaking if successful.  FB wants to create a portable digital identity.


Last week, after months of hype and speculation, Facebook finally revealed its plan to launch a blockchain system, called Libra. Since the launch, most of the attention has focused on Libra coin, the cryptocurrency that will run on the new blockchain.

But tucked away in one of the documents Facebook published is something that may turn out to be just as important as the coin—if not more so. A major goal of the Libra Association, the nonprofit Facebook has created to manage the project’s development, is to use Libra to revolutionize the concept of digital identity.

The relevant passage lives near the bottom of a document meant to explain the role of the Libra Association: “An additional goal of the association is to develop and promote an open identity standard. We believe that decentralized and portable digital identity is a prerequisite to financial inclusion and competition.”

But what is a “decentralized and portable digital identity”? In theory, it provides a way to avoid having to trust a single, centralized authority to verify and take care of our identifying credentials. For internet users, it would mean that instead of relying on Facebook or Google’s own log-in tool to provide our credentials to other websites, we could own and control them ourselves. In theory, this could better protect that information from hackers and identity thieves, since it wouldn’t live on company servers.
Read More >
Posted by DTTO News at 12:21 PM No comments: 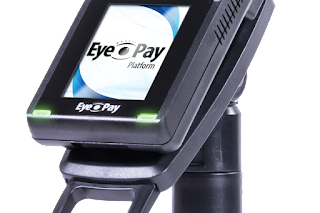 Iris recognition solutions firm IrisGuard has revealed a new point-of-sale terminal that can authenticate payments with customer’s irises.
Described as the world's first retail store payment system that utilizes Iris recognition as the single payment modality for all your purchases, the EyePay was designed specifically to operate with IrisGuard’s  end-to-end EyeBank system.

MUMBAI: In a first for any domestic bank, small-sized lender DCB Bank has started an Aadhaar-based ATM usage facility wherein a customer can transact using his biometricdetails instead of the PIN.

"We have started the first ATM in the country which operates using the Aadhaar data. One can do a transaction without the card as well," the bank's Managing Director and Chief Executive Murali Natrajan told PTI.

The user can key-in the 12-digit Aadhaar number or swipe the card at an automated teller machine (ATM) to start a transaction, but at the stage of confirming the identity, it requires biometric details rather than the PIN.

"All you have to do to authenticate is put your finger on the scanner. This is better than PIN, which can be forgotten because of multiple bank accounts," he said.

Seeding the bank account with the Aadhaar number will be essential before a customer can use the facility, he said, adding that initially, only DCB Bank customers will be able to make use of the service.

The solution has been developed in-house and involves connecting up with the Aadhaar server to authenticate the identity of the customer every time a transaction is initiated, he said.

Natrajan said it is a comparatively inexpensive solution and the bank, which currently has 400 ATMs, is targeting to cover its entire network under the system within a year.

The first of the Aadhaar-based ATMs has been installed at its corporate office in the megapolis' Lower Parel area and Natrajan said it will be waiting for a month more for the technology to stabilise before a mass rollout.

He added that it has great potential at the POS (point-of-sale) terminals at the merchants' end to make transactions easier and also for business correspondents.

Enrolments under Aadhaar are set to cross the 100 crore mark soon. The data is being used for a slew of purposes like opening bank accounts and the government's direct benefit transfer (DBT) scheme.

Natrajan said he sees the banking industry coming out with similar technologies so that ATM transactions can be carried out without a card.

In Focus: Mobile Money Update - Pakistan is leading the way with the help of the World Bank

Pakistan is leading in ‘Mobile Money’ as the people using mobile phone to transfer money more than any country of South Asia, World Bank report revealed.

World Bank’s Global Finder Database initiated the study, which gives insight about how people borrow, save, manage risks and make payment, told that an average three per cent of people in South Asia used a cell phone to receive or send money in year 2014.

“While there are still gaps between how often men and women use these services, Pakistan leads the region with 9% of men and 2% of women moving money on their mobiles,” report said.

According to report, India is behind Pakistan in South Asian countries, three per cent of male and one percent of female population used mobile phones to carry out financial transactions.

The Global Findex indicators are collected  from survey data coducted by Gallup, Inc over the 2014 calendar year, covering around 150,000 adults in more than 140 economies and representing about 97% of the world’s population. The set of indicators will be collected again in 2017.

The Global Findex is the world’s most reliable  database on financial inclusion that  measures people’s use of financial services across  the world.
Source
Posted by DTTO News at 5:23 PM No comments:

A cybersecurity executive strategist at Citibank recently spoke at the EmTech Asia 2016 conference where he emphasized the need for Asian banks to adopt biometric authentication solutions for mobile users instead of using PINs and SMS-based OTPs (one-time passwords), according to a report by ZDNet.
Tony Chew, Citibank’s global head of cybersecurity regulatory strategy, said that banking apps ought to add support for biometric technology, and condemned the apps for lacking “imagination and creativity”.
Read more »
Posted by DTTO News at 6:49 PM No comments:

US citizens are still wary of exchanging biometric data for more personalised or expedited government services, according to a new survey. In a study organised by Accenture’s #AFSFedPulse team, 45% of citizens said they would not share a digital photograph with government for better services, including the millennials demographic.

In addition, more than 50% of respondents – across generations – said no to sharing  iris scans with the government. The study, conducted by McGuire Research, focused on the prospect of citizens using personal data as “currency” for more rapid response from federal agencies.