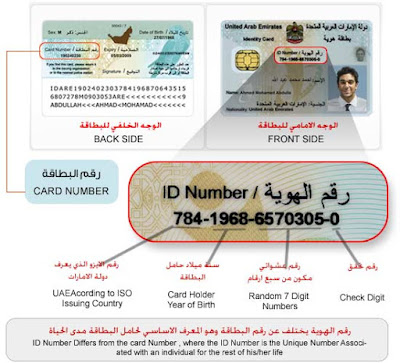 Card Features
The e- card has many features from which all the community individuals may benefit starting from safety and ending with the easy administrative services in addition to the feeling of attachment and contribution in building a modern and developed electronic government. The identity features may be summarized as follows:
How the Identity Card looks like?
The Identity Card is not that different form the ordinary cards in volume such as the bank card for instance. It is a plastic card with an electronic chip which contains all the information on its holder and his biological characteristics. As shown in the form above, the identity holder name, his nationality, photograph, fingerprint and Identity Card number, which is consisted of 15 digitals, are appeared on the card front side, while the birth date, gender, signature sample of the card owner, number and the card validity appear on the back side. The other data do not appear on the card face and can not be read without the consent of the identity holder.


Future Usage
Thanks to the systems integration Emirates Identity Authority envisioning to achieve with various governmental, semi-governmental, and private sectors, it is expected to extend the identity utilizations in the future to include other domains especially after completion of the registration of all national and residents of the United Arab Emirates. The ID Card maybe utilized in the future to store other cards information or provide various applications as follows:
Posted by DTTO News at 12:17 PM

The electronic identity card is one of the most important e-Government objectives the United Arab Emirates is attempting to achieve in order to simplify the administrative procedures as well as ease and upgrade the governmental services in line with the government's expectations aiming at promoting the customers service and governmental performance.

This is such an informative post. You have a lot of really great points. I wish I had this post as a resource when I started blogging.

This is such an informative post. You have a lot of really great points. I wish I had this post as a resource when I started blogging.
E Dirham Services.